This is the encounter between art criticism and cinema, or all about Rubens with sound and movement. Paul Haesaerts gave himself over to the praise of demonstrative didacticism and intelligent explanatory culture.

The lesson-catalogue is complete: the definition of the Baroque compared to the Middle Ages, the composition of the paintings, the life of Rubens, his wives, his children, his house and his workshop, the thematic analysis of his work, his career, the development of his art, the influence he had, etc. The content is in line with that advocated by André Bazin when he stressed the educational role of the cinema. The form is innovative and inventive. It uses animation to underscore the lines and circles of the structure of the paintings. The composition is thus visualised. It plays on the fragmentation of the screen to make comparative studies of paintings or different styles. But on top of this textbook virtuosity, Storck develops his famous method of entering into the drama of a painting through the use of camera movements: lateral travelling shots, sweeping over the canvas, lingering over details, the proximity of the characters and their faces. The first part of the film is more analytical and biographical. The second invites us into the painting and world of Rubens with lyricism, and resembles the profusion, generosity and luxuriance of the painter.

Special shots and animations : D and H. Sarrade at the Eclair workshops for specialised films.

One can see the documentary by Storck and Haesaerts as the repertory of these extreme representations: the stillness of the painting projected towards the dynamism of cinema; the order of composition of the materialistic rendition of bodies and movements brought towards the geometrical rigour of abstraction; the lines of movement of the composition coordinated according to a purely musical logic; the variety and complexity of the pictorial composition pushed towards the variety and complexity of natural forms; the exasperation of the poses of twisting bodies in movement that tips the dramatic instant into an ecstasy of the senses, an explicitly erotic tension.

Paul Haesaerts introduced a critical attitude to the screen. He does not pretend to be objective like Oertel. He gives us his view of Rubens and in order to situate the character in aesthetic evolution, he undertakes, through a series of comparisons, to reveal his calibre. He does not evoke Rubens through anecdote. He constructs him before our very eyes. Then, having drawn a general outline, he makes use of animated graphics and movements of the camera to explore his work, highlight themes, and underline constants. In this way, he rediscovers the specifically Baroque gyrating movement that is the soul of Rubens’ painting.

Henri Storck and Paul Haesaerts are honest. They go as far as possible in 1948 while still respecting the sensuality in Rubens’ work. But alas, in the world crisis of cinematographic prudishness, it is not possible to go far enough… In a religious scene such as that of Golgotha, the filmmakers can use all means without reticence. And mystery crushes the sensual effervescence, which, even so, is dangerous if we care about a faithful reconstitution of Rubens’ adventure as a human being.

Quite rightly, the authors have moved away from making the film into a sort of illustrated book or album… On the contrary, they have managed to discover a certain number of centres of interest and have organised around them a presentation of characteristic canvases or fragments thereof. In fact, they have successively used three different techniques of presentation: the historical point of view, technical analysis and dynamic presentation.

… Scornfully tidying away the place and the era, between the clothes and the house, is the film’s main fault… It is highly arbitrary to separate the man from his times when the place and era play such determining roles. It is also arbitrary to seek identical composition lines. Not that Paul Haesaerts is wrong… but wanting to shut everything inside the circle of a belly button is excessively biased…

Those who are lucky enough to be particularly sensitive to the plastic arts or who have enjoyed a pictorial education may find this didactic endeavour somewhat superfluous or sacrilegious. One could respond that such films can certainly not provide everything, but that, even supposing the deepest subtleties of an art escapes them, they can nevertheless help millions of the uninitiated to approach the holy of holies: aesthetic emotion. They seriously shorten the long path of culture that only a privileged few can walk. 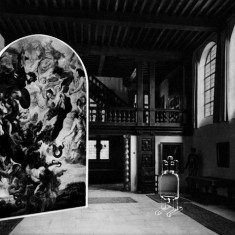