The World of Paul Delvaux

This is an historic film since it is the first that Henri Storck made about art. It is an original success that places the exploration of the painting in the foreground and accompanies it with a text and music of great quality.

It is a cinematographic poem wherein the director has instinctively felt that which he will make the focus of his work: the painting is king. He will always take the role of decoder of a pictorial universe, in which the world of the painter and his work are more important than his biography.
In Le Monde de Paul Delvaux the camera follows the bodies, the architecture, the perspectives by accompanying and revealing their story, what they show and the emotions they summon. The camera runs over the paintings like an eye reads a story. The music and the text also play on the principle of equivalence that echoes the force of the image and gives the soundtrack the role of poetical amplifier. Meditation, incantation, elegy, this setting in motion of an immobile world uncovers the sensuality of the big beautiful distracted women and the psychoanalytical echoes of the painter’s world. The height of daring was to film this in black and white. Yet this lack of colour, which could have been the death of the painting, in fact gives it an added, secret dimension, that of a reading where meaning is as important as the pictorial aspect.

Poem by Paul Eluard recited by the author

Production : Séminaire des Arts (under the direction of Luc Haesaerts)

On the occasion of the retrospective of the painter’s work at the Palais des Beaux-Arts in Brussels, December 1944 – January 1945

This film is more about Paul Delvaux’s world than about his work itself. It is a world that René Micha broke down into elements and for which André Souris composed a music that is both best suited and most exterior; music whose dryness is, paradoxically, very moving. This is also a psychological document, an essay of incursion into zones where the cinema, alas, rarely ventures.

Are not criticism of art and art history now techniques ill-suited to their subject, out-dated? May the image replace words, may discourse be the eloquent succession of images. And, just as a true writer critic gives words and sentences the style of commented creation, thus the filmmaker critic should design his work in the style of the work to be filmed.

Watching the film, one function appeared determinant to me, a purely musical function, that of tempo. Paul Delvaux’s painting is implicitly slow and Storck seems to have based the unity of his film on the slowness of his travelling shots. In any case, it is in the slowness that I found the most fundamental character between Delvaux, Storck’s film and the music that was to be incorporated into it. I concluded that the slowness would be the true theme of the score, of which it would determine the very substance. All the sound elements were slowed down with a certain exaggeration, any variation in the change of tone, register, articulation, key, patterns and intensity, was delayed in such a way as to prolong each state almost to saturation.

The figurative world is observed and travelled over as if it was a real world. Storck deliberately ignores the painting as medium, as object exhibited, and directly confronts the invention of Paul Delvaux’s specific space-time. He stages a mobile way of looking that settles into this space, sometimes lingering over a detail, a worrying link that emerges from the apparent naturalness of Delvaux’s perspective, sometimes travelling over the trajectories of memory and desire within the spatial syntax of his architects. 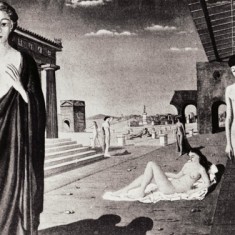